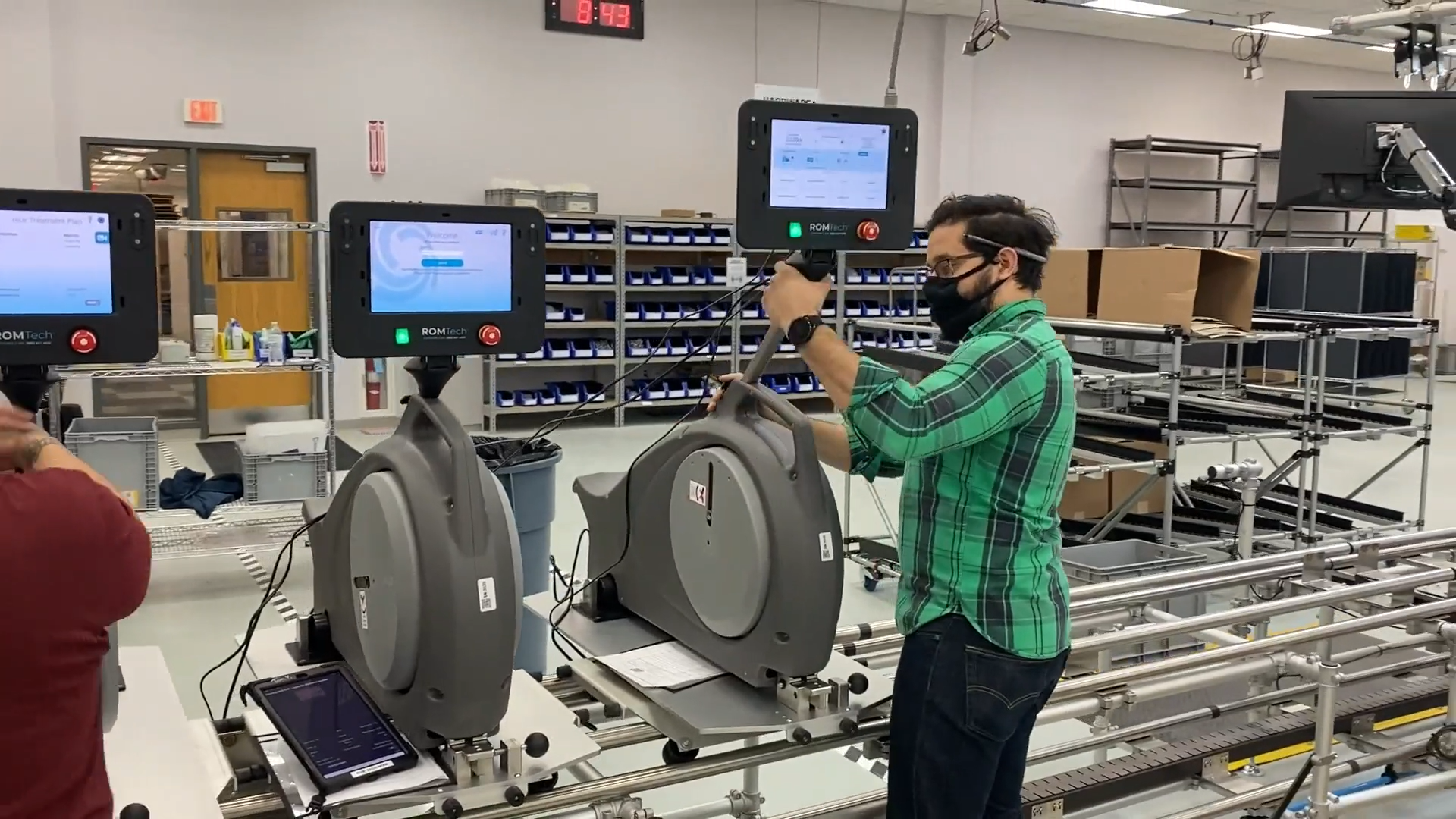 As the leader in advanced orthopedic rehab technology, ROMTech transforms the lives of patients daily by providing a faster, safer and more convenient road to recovery. The ROMTech Prescribe PortableConnect is unparalleled in what it offers to patients and medical providers in major part due to the way it has been, and continues to be engineered for the best use and outcomes of all involved.

The initial design of the Prescribe PortableConnect laid the groundwork for success to continue to come up with modifications and technological advancements. From initial prototype production to today, ROMTech’s engineering operations keep continuous modern innovation at the forefront of their minds and have been able to both streamline operations while advancing product design and output.

While assessing engineering operations within ROMTech over the last few years, there are several standout moments that we thought important to highlight regarding areas like software, manufacturing and product design refinement. Yet, all seemed to have one thing in common- they exist to deliver changes and updates that make the Prescribe PortableConnect and ROMTech’s telemed technology more user-friendly and accessible to as many patients as possible.

The early part of 2020 saw the ROMTech engineering team installing an integral new feature to the software application on each PortableConnect. This feature pulls serial numbers from PortableConnects during the manufacturing process and automatically syncs each unit to the coordinating app. Allowing for additional streamlining, the setup process for each Prescribe PortableConnect became even easier for users. Furthermore, there were additional new things introduced around this time including new features that automatically test, verify, and update firmware remotely in PortableConnects while they are in the field. This creates a seamless way to ensure that all units nationwide are fully up-to-date while eliminating the need for patients or DMEs to navigate the software update process on their own. There were also new features built and implemented into the software including a new diagnostic module that automatically tests and troubleshoots the PortableConnect and associated devices, both at the end of the manufacturing process and while devices are being used in the field.

ROMTech engineers also turned their focus to eliminating “software bugs” which would cause various problems with the PortableConnects while in use. They were successfully able to identify the sources of such pesky issues and remove each one-by-one overall making the software more reliable in use. Consistent new software releases further mitigated software errors and addressed opportunities for improved user interface, while zapping new “bugs” that come up.

The patient-facing app (which runs the PortableConnect device), was further engineered to include a new demo mode that facilitates on-screen diagnostics and quality check of the PortableConnect system, including device function, hardware, and software. This new adjustment of the software allowed the quality check to be completed in the factory before shipping, and repeatedly at the field distribution center as a quality check before deployment to patients’ homes. The clinician-facing platform also received attention and the new telemedicine functions of the Prescribe PortableConnect were introduced that included encrypted HIPAA-compliant video chat which overall improves clinical oversight. Other software features rolled out included:

With production ramping as the year progressed, ROMTech engineers were also able to modify the design for manufacturing (DFM) for the better. In this period of time, the cost of goods was slashed a significant amount (component cost to produce a single PortableConnect)–upwards of 60%. Not only did this adjustment create more room for profit, but the potential for the product to be less expensive on market and thus more widely accessible to patients further down the line.

A focus to improve overall durability with the Prescribe PortableConnect device is another consistent focus of the ROMTech engineering team. The early part of 2020 brought attention to the AccuRadius–the electrically actuated pedal radius adjuster which had presented problems in the field. Working together, the team was able to isolate the issues with the pedal and come up with a solution that withstood over five million successful pedaling revolutions.

Towards the end of 2020, there became a need to reassess a key component of the product design as the original touch screen used in the Prescribe PortableConnect device was discontinued by its manufacturer. Due to this, a new proprietary onboard computer with ROMTech’s own touch screen monitor was put into effect. This planned upgrade also made Bluetooth pairing easier and quicker, reduced cost significantly, and eliminated the problem of products being discontinued.

Additional key components of the Prescribe PortableConnect like the AccuAngle® (wearable knee angle tracker) and AccuStep™ ambulation tracker also became a focus in 2021 for improvement by ROMTech engineers. Necessary adjustments were made to these pieces to improve the durability and increase comfort in use by patients. Major design changes to the Electrically Adjusting Pedal additionally eliminated 45% of the screws initially used, which ultimately improves manufacturability and reduces the opportunity for failure. A redesign of the tablet enclosure was also a must as this led to improved accessibility of the touchscreen, allowing patients to perform teletherapy sessions both on and off the PortableConnect device.

The initial engineering behind ROMTech’s Prescribe PortableConnect laid a sturdy foundation for a technology that has already transformed countless lives. Yet, perhaps the most noteworthy thing about the team is their commitment to continuous improvement within all areas. From the software to the design of the device to manufacturing, ROMTech’s success will continue to reign as the leader in advanced orthopedic rehabilitation technology.

View other news in: PortableConnect